Phyllis Gilmore, Secretary Of SRS/CPS Is A Social Worker 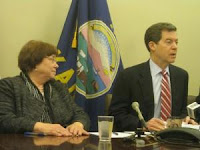 Phyllis Gilmore was the Executive Director of the KSBSRB, Kansas Behavioral Sciences Regulatory Board for the past 11 years. The board was established in 1980 to license and regulate psychologists, social workers, professional counselors, master level psychologists, marriage and family therapists and addiction counselors.

If the KSBSRB receives a report of alleged violation of one of their licensed workers, the board makes a jurisdictional determination on whether or not to investigate which must meet two criteria.

1. "The complaint pertains to a profession or scope of practice regulated by the board".
2. "The complaint alleges facts constituting noncompliance with, or violations of the rules, regulations, and/or Statutes, and/or Board ordered conditions governing the practice or conduct of the professional on whom the report is being filed".

See the link here for the Investigation Policies and Procedures, KSBSRB March 2006
http://www.scribd.com/doc/80433902/Phyllis-Gilmore-Exec-Dir-KSBSRB-Investigation-Policies-and-Procedures-March-13-2006

The December 11, 2006, Behavioral Sciences Regulatory Board Complaint Review Committee Minutes show that there were several cases where the committee determined "lack of jurisdiction". One of the cases included a child in SRS custody and the complaint was dismissed due to "lack of jurisdiction". There was also a complaint that a licensed social worker violated the confidentiality of adoptive parents.

NOTE, Several complaints have been made against Social Workers and those have been
DISMISSED DUE TO LACK OF JURISDICTION under Gilmore's watch.
See this link for the Dec. 11, 2006 KSBSRB Committee Minutes
http://www.scribd.com/doc/80434272/Phyllis-Gilmore-KSBSRB-Complaint-Review-Committee-Dec-11-2006-Minutes

On March 18, 2008, in a closed meeting Phyllis Gilmore and Roger Skurlock were questioned about these cases that they refused to investigate which were noted on the Dec 11, 2006 meeting notes. During the meeting Gilmore and Skurlock claimed they investigate ALL allegations, but that isn't the case.
Here is a clip from that meeting. Turn up your speakers, parts of the conversation are transcribed and you can read it. I would start at 1:00 minute into the video and at 1:35 you can read and hear the questioning of these cases:

No Surprise Here: "Her (Gilmore's) private sector experience is primarily within the areas of adoption and health care." http://www.srs.ks.gov/Pages/Secretary/NewSecretaryGilmore.aspx
Posted by Changing Kansas at 8:13 PM