Can you really have faith in a system that falsifies records to steal children? Are you concerned that the State files allegations against parents to remove children, then places the children in State custody with an agency with no oversight? ""Gilmore she said that DCF doesn’t have a contract with Faith Builders. DCF contracts with St. Francis in the Wichita region to provide foster care and family preservation services, she said. St. Francis contracts with DCCCA, a Lawrence-based organization, which works directly with Faith Builders, she said.""

Does anyone really believe that SRS Secretary Phyllis Gilmore is going to do something about violations of children and parental rights when she was over the KSBSRB and refused to investigate social workers when parents and families made complaints to the KSBSRB? http://changingkansas.blogspot.com/2012/02/phyllis-gilmore-secretary-of-srscps-is.html

What about these legislators who have known about these issues and have done nothing to help children and families? Our State lawmakers have written laws that give immunity to State workers with no consequences for violations of law by these individuals. When Don Jordan was the SRS Secretary he was recorded in a closed meeting stating that the Sedgwick County DA Nola Foulston's office bullied social workers to alter records to place children in foster care. The State did an audit, found this to be true, then dropped the ball. What was the purpose of the audit and multiple hearings over the years except to cost the tax payers money and fund the legislators retirements.

As for Brownback, he made promises to improve the foster care system and failed. Under his watch, more children are being removed from their parents custody each year that he has been in office. At this point, anyone would be a better option than Brownback. 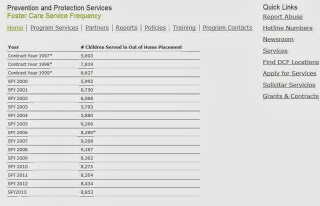 2008 March 18, 2008, SRS Secretary Don Jordan said the Social Workers were bullied into falsifying records: "But in Sedgwick County oftentimes we end up writing things because it's what our social workers get bullied by the district attorney's office ( Sedgwick County) into writing. So they really have no belief in what it says." "The reality comes down to, you send a 25-year-old social worker into a room with a 15-year county ADA who is willing to yell at them, cuss at them, scream at them and threaten them," Jordan said. Don Jordan said, “I am working on our staff that we do our assessments properly and we not get bullied into writing things we don’t believe” http://www.youtube.com/watch?v=J2BhDnnC2x4
Jun. 08, 2008, Concerns arise over SRS files' validity, BY TIM POTTER, The Wichita Eagle ""For years, some families have complained that court documents filed by social workers that result in children being removed from the home have contained false or fabricated information. " Now, some say they have proof. The head of the state's child welfare agency was recorded in a meeting with a family advocacy group saying that Sedgwick County prosecutors have "bullied" social workers into putting information they don't agree with in affidavits....But critics of the state child custody system and some legislators say the remarks by Don Jordan, secretary of the Kansas Department of Social and Rehabilitation Services, raise questions about the affidavits' validity. "" http://groups.google.com/group/alt.support.child-protective-services/browse_thread/thread/3db7b9c96116196d/8ae03d3a4852077d?lnk=gst&q=nancy+berry#8ae03d3a4852077d
Child removal inquiry's focus Posted: Friday, October 31, 2008 The Legislative Post Audit Committee last month approved the SRS probe after statements by SRS Secretary Don Jordan that the Sedgwick County prosecutors "bullied" social workers to put things in affidavits that they didn't truly believe. Jordan since has backed off those statements, and Sedgwick County District Attorney Nola Foulston has denied the accusation. But lawmakers still pushed for an investigation — saying they had heard such allegations even before Jordan's widely publicized statements. Senator Schodorf said she asked for the audit after Kansas Attorney General Stephen Six declined to investigate, citing Jordan’s retraction of his statements. http://cjonline.com/stories/103108/kan_350202188.shtml

Legislators criticize DCF for keeping report secret Results of internal review of Kansas agency for children, families won’t be disclosed DCF's letter to legislators In a letter to state legislators, the secretary of the Kansas Department for Children and Families said her agency wouldn’t place children at foster homes operated by Faith Builders until a review of ongoing concerns is completed.

Phyllis Gilmore wrote in the letter dated Thursday, “I want you to be aware that in an abundance of caution, I have instructed our contractors and sub-contractors to do no further placements with homes associated with Faith Builders.”

That review was completed and given to Gilmore on Oct. 10, but Gilmore would not release the results publicly, citing attorney-client privilege. That resulted in a bipartisan group of legislators calling for the review to be made public, which prompted Gilmore’s letter.

Theresa Freed, a DCF spokeswoman, said the letter was sent to eight legislators who have spoken publicly to the media about the issue. The letter will be sent to additional legislators, if they request it.

Diane Bidwell resigned last week as director of the Wichita office. DCF officials have said the resignation was voluntary.

Gary Ayers, attorney for Faith Builders, said Thursday he wasn’t aware of the content of the letter until a copy was provided by The Eagle.

“I was trying to reach our client,” he said. “I don’t know if Faith Builders has received any notification from DCF. This comes as a surprise.”

Ayers said Faith Builders has 25 foster homes in Wichita. Since it began operation in 2007, he said, it has helped many families by providing food, cribs, rent, furniture, respite and foster care.

When he met with the DCF investigator during the preliminary review, Ayers said: “We asked if Faith Builders had done anything wrong.

Gilmore said in her letter that the initial review has prompted her to request additional “work be done to address DCF’s association with Faith Builders.”

“I want to assure you, we are quickly and thoroughly reviewing each and every case in which Faith Builders has been involved,” she said. Information from the additional review will be shared with the legislators after it’s completed, she added.

Gilmore she said that DCF doesn’t have a contract with Faith Builders. DCF contracts with St. Francis in the Wichita region to provide foster care and family preservation services, she said.

St. Francis contracts with DCCCA, a Lawrence-based organization, which works directly with Faith Builders, she said.