Fight for Daughter Could Change Law in Kansas 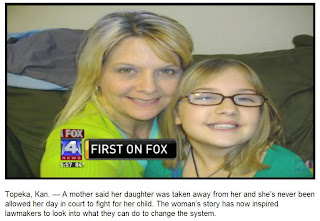 Topeka, Kan. — A mother said her daughter was taken away from her and she’s never been allowed her day in court to fight for her child. The woman’s story has now inspired lawmakers to look into what they can do to change the system.
Karen Williams finally had a day in court Tuesday, but it wasn’t the custody hearing she had hoped for. She went to the Kansas Appellate Court arguing that her constitutional rights were violated when a Douglas County judge removed her daughter from her custody all based on the word of a court appointed case manager. The case manager suggested to the judge that there was “probable abuse.”
“She’s never had to give any facts to back up these allegations,” says Williams, “and all I’m asking for is the right to come to court and defend myself.”
Williams and her husband say what’s actually going on is that they questioned the case manager.
“Anyone who challenges her she’s going to retaliate,” Williams says.
Her new husband Stan Williams agrees, adding that the case manager isn’t neutral, but instead, she “picks sides.”
“I’m not the only person out here who has experienced this,” Karen Williams adds, “case managers have no governing body, no one is looking over their shoulder except for the judge who put them there.”
Williams story has inspired some law makers to investigate the problem. Kansas Representative Joe Patton (R-Topeka) wants to change the law to require educational standards for case managers, and he wants judges to be required to have a hearing if there’s a dispute over child custody, instead of just signing off on case manager’s recommendations.
“It was never the legislatures intent to deny parties a hearing, especially involving children,” Rep Patton says, “so if one party or the other requests a hearing they should get that hearing.”
“I’m very excited the legislature is getting involved and are recognizing this is a serious problem,” says Williams.
Williams hopes a law change will help in the future but right now her focus is still on her own daughter.
“And I’m hopeful that its going to turn around here and we’ll get our day in court,” Williams says, “that’s what we wanted.”
Representative Patton says his bills were introduced so late in the legislative session there may not be enough time to get it passed now. But if he has to introduce it again next session he thinks it ought to pass pretty easily.

http://cjonline.com/news/2012-05-15/mother-speaks-case-management-bill#comment-564257
By Andy Marso cjonline.com Copyright 2012 CJ Online. All rights reserved. This material may not be published, broadcast, rewritten or redistributed.

Mother speaks on case management bill
THE CAPITAL-JOURNAL
A mother fighting a Douglas County case manager's decision to severely restrict her contact with her daughter called a related bill passed by the Legislature this week "a great first step" but said more should be done to protect parents' rights.
Karen Williams previously had full custody of her daughter before a case manager appointed by the court to work with her and her ex-husband decided to limit her to one or two hours a week of supervised visitation at a Lawrence facility called The Farm. Williams stopped by the Statehouse on Tuesday after her case was heard in Alma by the Kansas Court of Appeals.
Williams says her rights to due process were violated when the judge allowed the new custody arrangement without giving Williams a full hearing to respond to any evidence for the case manager's decision.
"I still have parental rights, supposedly, but effectively I've been stripped of them," Williams said.
Williams has said that she is only asking for her "day in court" rather than allowing custody matters to be decided based on confidential conversations between judges and the case managers they have appointed.
"I think the biggest piece is the oversight," Williams said. "Case management needs more oversight — someone they're accountable to."
The measure passed by the Legislature, Senate Bill 304, seeks to establish that, to some degree. It requires that case managers carry some sort of professional license in areas like law, social work or psychology so they will have a licensing board to which parents can address complaints. Williams' case manager, Cheryl Powers, let her social work license lapse and is currently unlicensed.
The bill, the bulk of which pertains to domestic violence rather than case management, passed 116-0 in the House and 35-1 in the Senate with Sen. Terrie Huntington, R-Fairway, the only dissenter.
But before the bill passed, another exception was added to the list of who qualified to be a case manager — "a court services officer and have training in domestic relations cases as prescribed by the district court in which the case is filed."
That provision, which allows individual counties more flexibility, disappointed Williams' current husband, Stan Williams.
"(Case management) still needs more oversight, I think," he said.
Rep. Joe Patton, R-Topeka, has expressed a desire to push for stronger reforms of case management to ensure that parents who object to case manager recommendations are entitled to full evidentiary hearings.
But other legislators have advocated waiting to see what the appeals court does with Williams' case.
Andy Marso can be reached at (785) 233-7470 or mailto:andy.marso@cjonline.comFollow Andy on Twitter @andymarso.
Posted by Changing Kansas at 9:58 PM