Just Say "NO" To Gilmore

Many citizens have written all of the Kansas Senators expressing dissatisfaction of how Phyllis Gilmore refused to investigate complaints made against licensed social workers and requested that Gilmore not be confirmed as the next Secretary of SRS. Many families, under Gilmore's watch as the Executive Director of the KS BSRB, were told their complaints would not be investigated "due to lack of jurisdiction".

The latest today in the Kansas Health Institute article, regarding the families concerns and letters to the Senators, Gilmore said the "complaints were misguided, noting that the decisions not to act on the complaints were not hers to make but were made by the board."

Acting above the law, Gilmore's statement acknowledges that she and her board members chose to ignore allegations of abuse by licensed social workers.

Gilmore has proven that she isn't qualified to be the next Secretary of SRS. Not only did she fail as the Executive Director of the KS BSRB to monitor the board members to assure they followed policies, procedures, HIPPA and Kansas Statutes, Gilmore ignored her responsibilities to citizens as well. As Executive Director for 11 years, just how many cases were dismissed due to "lack of jurisdiction" under Gilmore's watch? This needs to be investigated.

The citizens' messages are clear, Gilmore's actions or rather FAILURE to act on behalf of citizens has been proven,

Just Say "NO" To Gilmore
DO NOT CONFIRM PHYLLIS GILMORE
as the next Secretary of SRS.
Here is the article: http://www.khi.org/news/2012/mar/05/gilmore-confirmation-draws-opposition/ 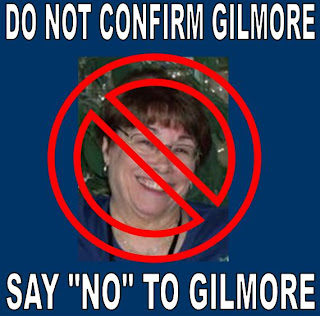 DON'T GET A CASE OF THE GILMORE'S
That would be the newly appointed SRS Secretary Phyllis Gilmore if she is confirmed.
And the "Case of the Gilmore's" is not going to go away in a week or 2 months.
Here is some history on Phyllis Gilmore...As Executive Director for 11 years over the Kansas Behavioral Sciences Regulatory Board; Gilmore was responsible for monitoring Social Workers. During her time, many families reported Social Workers for not following policies and procedures, HIPPA Laws, and laws.. Phyllis Gilmore and her staff refused to investigate Social Workers claiming "no jurisdiction".
Gilmore and her cohorts were questioned in a closed meeting in March of 2008 about refusing to investigate these cases. You can read more about that here and watch the video.
http://changingkansas.blogspot.com/2012/02/phyllis-gilmore-secretary-of-srscps-is.ht
Posted by Changing Kansas at 10:16 PM