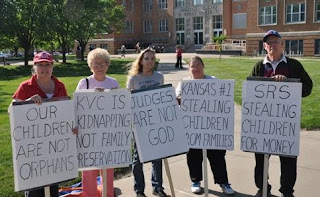 This Picture Posted by the Kansas Watch Dog
May 9, 2010, More Info Below :
http://kansas.watchdog.org/3734/adoption-protest-at-joco-courthouse/


Children deserve protection, their family and the right to know where they come from.
Kansas is a leader in taking children from good homes on false allegations of abuse.
Kansas foster children have been adopted out to strangers where they have been abused, raped and murdered!
http://www.youtube.com/watch?v=hu_mjvg_Vt4
Just ask Adam Herrman, born Irvin Groeninger III, when and IF you find him.
Their signs said:
Comments from the protesters included:
Kathy Winters (Olathe, left-most in picture)
Grandmother

“Tonight they’re going to be adopting children out.”
“There are kids being adopted out that have family that want them.”
“These children, who have been in foster homes, have been taken away from their families. They’re going to be adopted by strangers. …”
“What we’re protesting is there are families that want these kids. The adoption doesn’t have to be to strangers. These kids have known these families since they were born. They need to be with their families — with their grandparents.”
“Instead, the state and the private contractors make more money when they adopt them out to strangers …”
“SRS doesn’t believe in family preservation. …”
“I’m not talking about children who are truly, truly abused. I’m talking about the ones they take the kids away just because they can. …”
“We’d have a lot more people here, but they are scared to death … It’s not a free country. You can’t come out and speak” [without retaliation]. What can they do to me now? They’ve taken my grandkids away.”
“The solution is that we have to have some laws that protect family preservation. They don’t even try to keep the family together.”
Sadie Carpenter (Olathe, second from left in picture)
Grandmother and former social worker


“The solution is to change the laws and get rid of the private contractors.”
“They string you out … They promise you, ‘if you do this, this and this,’ you can get your children back.”